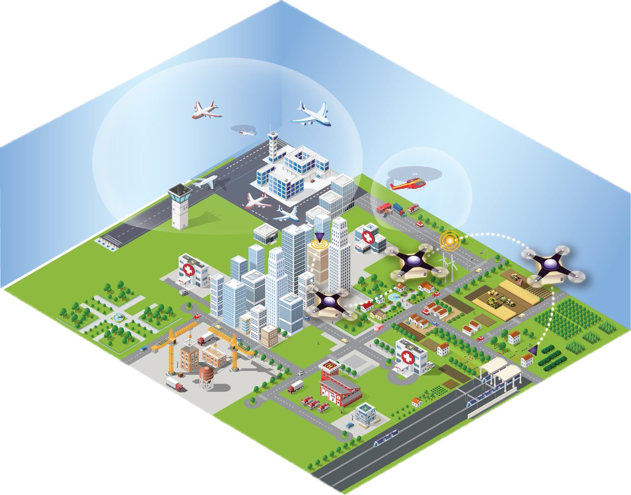 The ICARUS project is focused on a critical issue that has to be solved to integrate manned and unmanned aviation in the future; establishing a Common Altitude Reference System adequate to the particular needs of drones and general aviation operating in Very Low-Level (VLL) airspace, especially in cities and other congested airspace scenarios.

The issues involved are complex and very technical, but the topic of safety is common to all. For that reason, we propose a very short and clear introductory video to better explain our research to a general public at large.

Altitude information is fundamental for traditional aviation since it is needed to avoid collisions with ground obstacles and maintain vertical separation between aircraft. That’s why pilots measure and transmit their altitude constantly.

This measurement mechanism is reasonably simple and relies on a property of the atmosphere: the ratio of altitude to atmospheric pressure – as the first increases the second decreases.

Different scenarios have different requirements. For that reason, three main Barometric Altitude References have been established:

… and in the drones’ world

In principle, the traditional Barometric Altitude References can be used by drones as well, but there are better alternatives.

Currently, drones use both barometric and satellite systems (GNSS) to measure their altitude. However, barometric altitude measurements are strongly affected by local environmental conditions, for example temperature gradients in built areas.

Also, drones can take off and land almost everywhere, not only from designated airfields, thus rendering the QFE system worthless as a common reference.

Geodetic altitude computed using Global Navigation Satellite Systems (GNSS) using multi constellation configurations introduce significant improvements as the basis for common altitude reference for drones, especially in VLL airspace. The accuracy of the altitude estimation is enhanced, i.e. altitude measured in centimetres rather than in tens of feet, while augmentation techniques (such as the European EGNOS system) ensure a high precision and error detection.

The Common Altitude Reference System proposed by ICARUS introduces methodologies and procedures to have the new geodetic model coexisting with the traditional barometric approach.

ICARUS will be a U-space U3 service that will provide Common Altitude Reference services to its subscribers.

Even though drones will enjoy immediately the benefits brought by the geodetic model due to the profile of their operations, manned aviation, especially general aviation can, and will, also benefit from this new approach.

For that reason, the ICARUS consortium is currently performing an online survey aimed at the drone and general aviation sectors to determine what are their most important needs and requirements, to help designing the future ICARUS service.